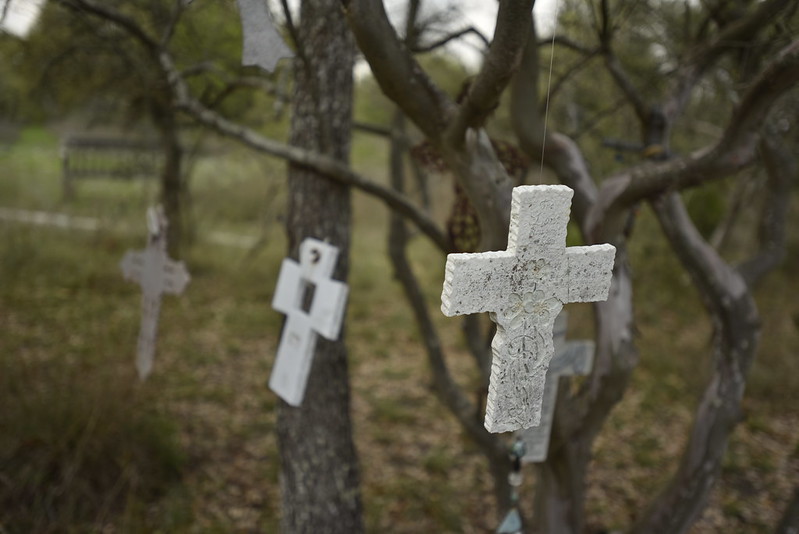 An Ordinary Mission Church Leads to a Unique Journey

New Life began as a new mission start in 2004, meeting in a local pizza parlor on Sunday nights.  Later that same year, we moved into a rental space on Hwy 290 in Dripping Springs.  In 2010, a 12-acre property was purchased for our mission church by the Mission Investment Fund of the ELCA.

After experimenting with different  outdoor worship schedules, we began a regular early Sunday service outdoors on our land in 2013.  On Maundy Thursday of 2014, after the altar was  stripped, it was carried out to the land and that Easter we became an all-outdoor worshiping  congregation.

New Life chartered as a newly organized congregation of the ELCA on February 5, 2017 and was accepted at the Assembly of the Southwestern Texas Synod on May 6, 2017.  Our first pastor was installed on June 4, 2017, Pentecost Sunday.

How We Became an Outdoor Church

"When we made the decision to give up the rental space, we had ostensibly a fiscal motivation in that we could no longer afford both rent and land payment. The choice was which payment to keep: rent or land payment. We believed the future lay on our own land, not in a rental space—a future, we hoped, of growth and of providing welcome and hospitality to our neighbors.

We have come to love worshipping outside, dressing casually, having dogs among us. We love the freedom the children have to explore God’s earth."

"It was a bold move for this small congregation but it has come to differentiate New Life.  It is a sacred place where Nature infuses your senses with the wonder of God's creation and in turn you feel close to His presence.

IT WAS A HUGE LEAP OF FAITH"

"We envisioned a place that could be used by all of the Dripping Springs Community. Once we were full time on the property and under the Oaks, we cleared a space for our winter worship tent.  We used a booth we had from Founders Day for the bird blind and later added a garden to help our community food pantry.  Our children's Garden Camp helped to plant food; we wanted to teach the youth about being part of God's creation, giving to others, and protecting our environment.

We added Stations of the Cross with crosses being made by recycled material. We also put in the Labyrinth for a meditative spot.  We enjoyed the togetherness of our church work days to build picnic tables and trim trees; mowing, mulching cedars, and cleaning up stumps.

It was a lot of hard work to take the hard scrabble land of the Hill Country and turn it into a beautiful, sacred worship space, but it was done with the Holy Spirit's guidance and a whole lot of love."